Wow, what an unexpected turn of events here in NYC!!

My original post was a fairly quick one, explaining the reason for this trip and sharing how Charlotte has been doing. So that’s where i will start!
Well, we are back in the big city! Charlotte will be scanning and getting vaccine #6!

The three girls and I flew alone this time. Though the thought of making the trek was nerve wrecking, we made it! Each girl was perfect!

Charlotte has been doing wonderfully! She still loves school! Our girl has been reading small books to us! In just a short time, she has learned so much and is constantly eager to learn more.

Lately her cough has been really bad. It is a cough that has lingered from the summer of 2016. We believe it could be a side effect from high dose radiation to her ribs. Poor girl coughs so hard that sometimes she vomits or can’t breathe, but she is so used to it, that she just continues whatever she was doing.
We have been anxiously waiting to see a pulmonologist. It seems there are only a few pediatric pulmonologists and a long wait to get in. I’m not sure if anything will really be able to help but we are hoping and praying there’s a solution.

Well, we got in on Saturday and had an easy Sunday hanging out. Candlelighters NYC gave us tickets to the Playfair and we were able to see all of the hot new toys and play with them from each toy manufacturer. Such a fun, exhausting time! The girls loved it. 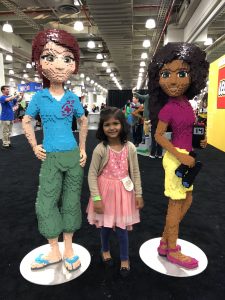 Monday Charlotte had a spinal MRI. She had to have her port accessed and blood drawn. She went down for her scan and came back up to the pediatric floor around 2 pm. We were informed that the Neuroblastoma team wanted to see her. This is normal, kind of like a check up. I ran into Charlotte’s primary oncologist and shared my concern about her cough and how it was getting worse.
One thing i Love about her doctor is that she is a mom to a young boy, so she has always taken my mama feelings into consideration. She has been guiding us since diagnosis. Even when Charlotte was a patient at Doernbecher, Dr Basu would respond to emails, call me back, explain things that Charlotte’s doctor and nurses didn’t know much about. She had always helped me and taken my research and opinion into consideration. This is all before transferring care. Before having any of our insurance info, any money, or a social security number to charge later. I have seen her on the verge of tears with bad news and her eyes light up with good news. She genuinely cares for our little fighter. We love her!

An hour went by and i told my mom i would see if the team could see her Tuesday morning since we had to come back anyways. Usually this isn’t a big deal, but i was told no. So we waited. We were called back and it was one of my favorite NPs that we rarely see anymore. She thoroughly examined Charlotte. She asked questions, and through this time she noticed Charlotte’s heavy breathing and elevated heat rate. While sitting still she was breathing above a 40 and her heart rate was in the 140s. She wanted to order an X-ray but was told by one of the doctors that it wasn’t necessary. They were able to get Charlotte into a pulmonologist the next day between treatment.

Tuesday, we got to the hospital to get Charlotte’s 6th vaccine shot. The doctors wanted an echocardiogram to see if they could figure out why her heart rate was beating so fast. Heart damage is a possible side effect from the chemo she received.  We were then sent to X-ray, they decided it was important to check it out. After her X-ray, we went down the street to Cornell. Charlotte had a pulmonary test and we met with the pulmonologist. She was unable to complete the test but together, we came up with a plan in hopes to find relief. 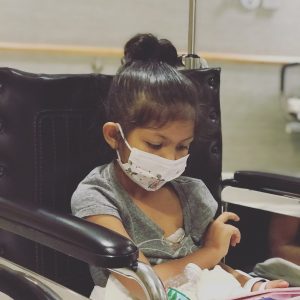 Her X-ray showed that her insides had shifted to the left and that she had fluid around her right lung. Charlotte has a mediastinal shift and pleural effusion. They wanted her admitted to the hospital, to monitor her. Every one was amazed that Charlotte was showing zero distress on the outside with everything that was going on, inside. When we asked for an estimated date to be able to go home, it was unknown. We expected to be in the city for a while and cancelled our flight home.

She has bronchiolitis as well. They showed me the air pockets in her lungs and the blocked airways that showed up on the CT. They kept referring to it, as a partial collapsed lung.
They started with a nebulizer and a vibrating vest to shake the mucus out. They took a sample of it and started her on antibiotics. She was also given an inhaler for her coughing fits.
We will continue this treatment at home for two weeks, Then they will reassess and decide whether a bronchoscopy is necessary.

As soon as Charlotte was admitted, I posted on her Facebook page for prayer and they started flooding in. We honestly thought Charlotte would be there for a while. Even on Wednesday afternoon the doctors believed it would be there for quite some time.  Then Wednesday night, she was discharged with clearance to fly home! The power of prayer is something mighty!

Our family friends, the Pratt’s, from Oregon have been traveling the country by RV in hopes to find a place to live. These 5 amazing people all suffer from Lyme disease and it’s coinfections. They are hoping to find a place to call home with a warmer climate. While doing this, they are living in an RV, exploring the lands of this great nation. They just happened to be in NYC at the same time as us. We were able to enjoy dinner, the subway, Times Square, and the Disney store together!

Charlotte received her 6th vaccine on Thursday afternoon and we flew home on Friday. She is doing well, other than the typical swelling and redness of the injection site. The breathing treatments and inhalers will take some getting used to, for all of us but are definitely doable!

With this long post, I still don’t have her scan results but felt it was necessary to update each of you! Another post will come as soon as I know the results.

Charlotte has a cookie party with her class planned for Monday and was disappointed when she thought we would have to cancel. Now she can’t wait!!

Thank you for praying and Please continue to pray for her

“For which cause we faint not; but though our outward man perish, yet the inward man is renewed day by day.”
‭‭2 Corinthians‬ ‭4:16‬ ‭KJV‬‬

“Looking unto Jesus the author and finisher of our faith; who for the joy that was set before him endured the cross, despising the shame, and is set down at the right hand of the throne of God.”
‭‭Hebrews‬ ‭12:2‬ ‭KJV‬‬